Kimberly Connors guides us through Mill Corner's history and eventful past in this video walk-through made possible by the generous support of Massachusetts Cultural Council and the Acton-Boxborough Cultural Council, and produced by ActonTV.

On the 4th of March, 1702, Ephraim Jones, Samuel Jones and Jonathan Knight signed and sealed eight articles of agreement establishing themselves a partnership to develop the 600 acres of the Iron Work Farm, near Concord, that they had purchased the previous September.

This was the beginning of South Acton and its long history of business and commerce, and was, in fact, the earliest concerted effort to make a settlement in the present town of Acton.

And, the business interest specifically established by the agreement of 1702, although its ownership and character have changed over the years, is still operating after 275 years.*

By the Articles of Agreement, Ephraim Jones owned half interest in the venture, and Samuel Jones and Jonathan Knight a quarter interest each, the two halves being specifically laid out as ownership of mills on the south and north ends of the dam.

*Erikson Grain Mill is still operating on the site of this original business interest after 300 years. 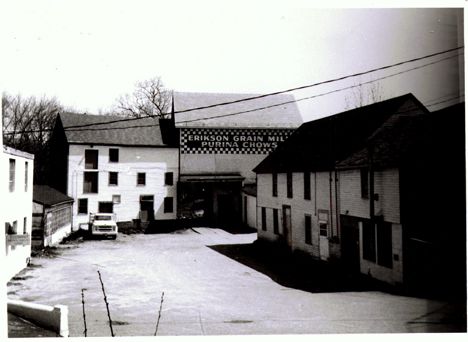 Sometimes called the “Corn Mill”, was built in about 1750 by Ammi Ruhamah Faulkner and was owned by him until 1756; then by his sons Francis and Ammi jointly; by his grandson Winthrop Faulkner; and then finally by the latter’s son Winthrop E. Faulkner. By the late 18th century the mill stones for grinding flour (French buhr stones) were operated by a “tub” water wheel, a horizontal undershot wheel located under the mill building.

Winthrop E. Faulkner enlarged the grist mill building to a three-story structure, with a cupola, probably in the 1840s, and in about 1870 increased its efficiency by installing “Blake’s Patent and Improved Water Wheel, manufactures by Blake Brothers, East Pepperell, Mass.”, an iron turbine, in principle and advancement on the old “tub” wheel.

As business flourished under his son-in-law Charles Harrington’s management, a tall grain elevator was added to the building over the railroad siding.

The old grist mill building and the grain elevator building (except for its brick first story) were destroyed by fire on the 26th of September 1976.

The Potash Works and The Blacksmith Shop

In addition to the fulling, saw and grist mills, there was a Potash Works in the mill yard, where wood ashes were purified to prepare them for use in making soap. This is first mentioned in 1787, when Ammi Faulkner willed it to his brother Francis. The Jones accounts in 1798 show that Francis Faulkner and Aaron Jones paid John Goldsmith for repairs to and “smithwork” for it, and that James Hapgood settled his account by paying “5 cord of pine wood for the Potash - $8.34. “

The exact location of the Potash Works in the mill yard is not known.

The Blacksmith Shop was apparently the small building shown in its own enclosure in the saw mill yard in the 1831 plan. It is mentioned in an 1856 deed as being then occupied by Aaron Hayward.

The dam was first built in 1702, utilizing the natural waterfall of the brook and was evidently made of stone and wood, for Faulkner accounts as late as 1813 mention repairing it with wood.

“To know whether the town will insist on Mr. Faulkner opening his dam 30 days in the year as the law directs, where alewives and fish pass in great plenty.”

After four years of the town’s insisting that it should be opened, Ammi Ruhamah Faulkner and Samuel Jones, as owners, took the problem to the Middlesex Superior Court, which found that the dam was“so formed in Nature” that opening it would cause “an unspeakable damage” which “cannot... ever serve the Public or any Private Interest.” Evidence presented to the Court also noted that no alewives had been seen in the brook for over twenty years.

The present height of the dam was established by Robert Lewis Davis, Civil Engineer, in 1848, and its all stone construction dates from that period.

The Fulling Mill was built by Ephraim Jones in 1702 and was in operation by 1704. Here the rough home made cloth was washed and thickened up into finished material, only one of the processes of the clothier’s trade. The rest of Jones’ textile business was carried on in his house (the Faulkner House), where he had his wool cards, spinning wheels, looms , clothier’s press and shears, and the dye kettles.

After Ephraim Jones' death in 1710, the fulling mill was operated by Joseph Fletcher (who married Jones’ widow) till about 1728, and then by John Shepard.

The business as carried on in the late 1700s and early 1800s is described in the biography of Col. Francis Faulkner:

“...a fulling mill, which was among the very earliest efforts at the manufacture of woolen cloth in this country. There was first a carding machine which changed, as by magic, the wool into beautiful rolls. These were distributed to many house to be spun and woven into rough woolen cloth and returned to the mill. Here the cloth was fulled under stampers with soap, which made it foam and helped cleanse and thicken it up. The process of raising the nap with teasels was exceedingly interesting. The teasel was a product of nature.... It seemed expressly and wonderfully created for that very process. Then came the shearing off all the inequalities by the swift-revolving shears and the final finishing-up into cloth.
When the wool was of fine quality and evenly spun, the result was a passable broadcloth of great durability.”

With the coming of the Industrial Revolution and the great textile mills of Lowell and elsewhere, (in which the Faulkners as clothiers, played a significant part), the fulling mill was discontinued in the 1840s.

The mill building was converted to a Plaster Mill, where blocks of gypsum were ground into a powder which was used by farmers on their ploughed soil and was beneficial to growing crops.

The Saw Mill was first built in about 1706 by the Jones and Knight partnership, down stream from the fulling mill, apparently near the corner of Parker and River Streets where the forge of the “New Iron Works” was set up two years later.

After 1728, when the forge site was abandoned, Samuel Jones and Ephraim Jones, Jr., moved it up stream to the more central location at the north end of the fulling mill dam. A New saw mill building was built in about 1812 by Aaron Jones and Winthrop Faulkner.

Through the 18th and early 19th centuries the saw mill and lumber yard were owned in halves by the Joneses and the Faulkners, but were managed but the Joneses:
Samuel Jones, from 1732 to 1802,
Aaron Jones from 1802 to 1828,

“Mr. Jones has accomplished as much, perhaps more, active business than any other man in Acton. His farm, cooper shop, mill and lumber yard received his early and abundant attention.”
from obituary of Aaron Jones, 1836

“We enter the saw mill and have a little conversation with Mr. Abel Jones, who is patiently at work upon the great pile of logs which the farmers have delivered to be transformed by his old-fashioned up-and-down saw into boards and timbers of various sizes.”
from South Acton in 1840

Abel Jones sold his interest to Winthrop E. Faulkner in 1851, and the building was evidently enlarged or rebuilt at about that time.

(Adapted from a display originally created by Robert Nylander in 1977)

As noted below, we skip the open house tours in August, but have two more in September and October.